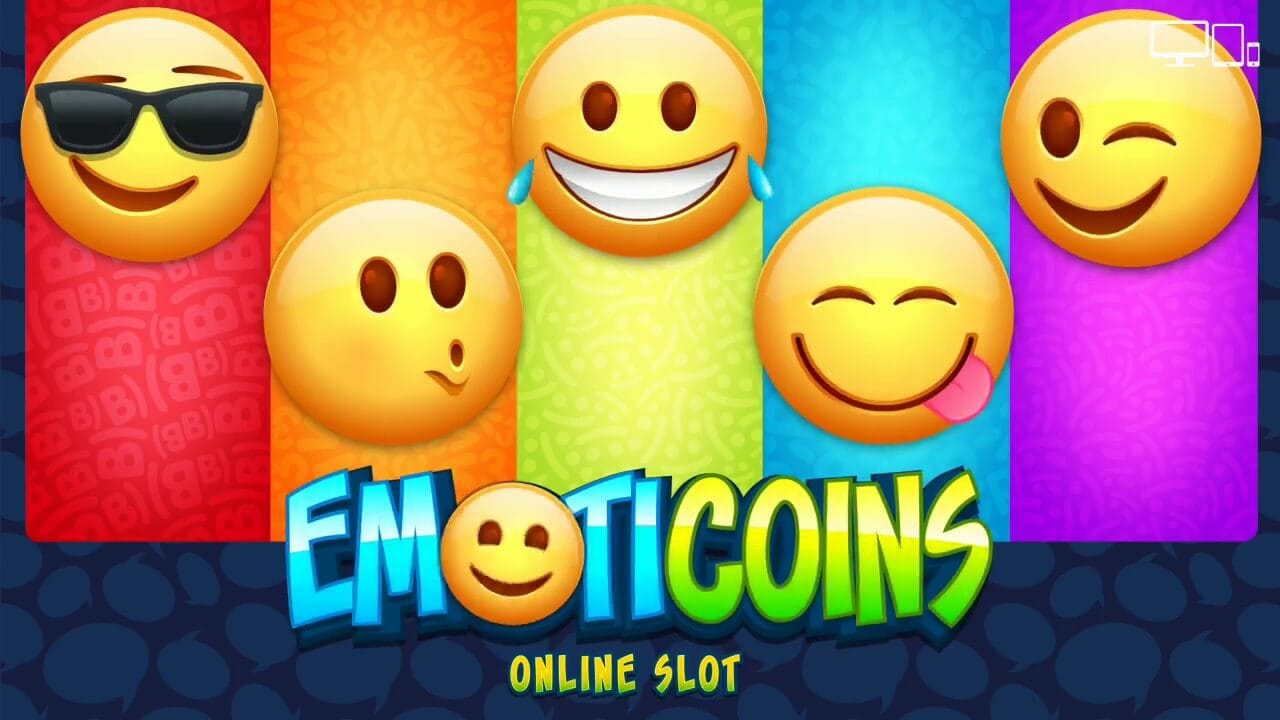 About Emoticoins Slots - Read Our Review of This Game

This colorful game is for those who love emojis - and even those who don’t! Inspired by those infamous cheeky faces we all know, Emoticoins is among the top pay by mobile slots with a more unique online Slot theme.

Emoticoins is one of the most entertaining and engaging Slots games, combining emotions with epic gaming seamlessly.

Released by Microgaming in August 2017, Emoticoins has all of the money and laughing faces you’d want when you’re playing with Slots.

Whether you look at emojis with a heart face or an angry face, there’s no denying they’re a part of popular culture these days.

Microgaming - About This Developer and Their Games

In addition, Microgaming’s progressive jackpot network is the biggest in the world and has paid out more than €1 billion.

In 2015 Microgaming took the Guinness World Record title for the ‘Largest jackpot payout in an online slot machine game’ when a player won £16,214,860.30 from a 25p spin.

Microgaming, being among the founding members of eCOGRA (e-Commerce Online Gaming Regulation and Assurance), helps set the standard in fair and responsible gaming.

In addition, the software supplies tackle issues in health, sport, and education through their initiative, PlayItForward.

This Slots HQ is located on the Isle of Man. Named Sixty Two, the towering offices opened in July 2017.

As well as all of the above, Microgaming also launched branded blockbusters like Jurassic World, Game of Thrones, and Playboy Gold. A world first, Microgaming also developed mobile casino software in 2004 and offered a deposit by phone casino option since.

Other Slot games by Microgaming 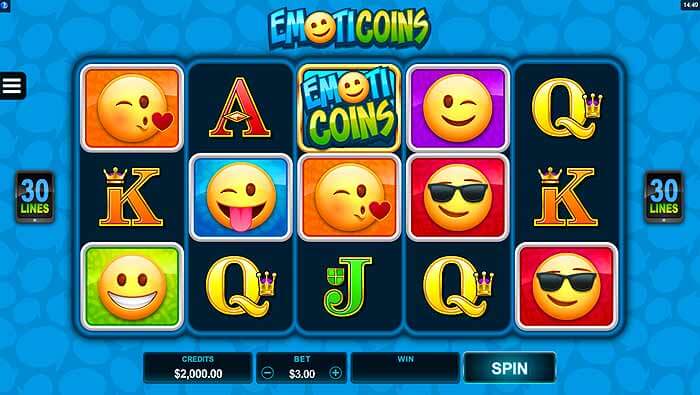 This is one of the best online slots available to play, set across five reels with 30 pay lines - the layout’s standard but the gameplay is anything but.

Playable from just 30p per spin from all devices, Emoticoins benefits from a wide range of features that most other Slots don’t have.

With this exciting addition, you can get five extra wilds added for your next spin. There’s also a Free Spins feature where players can get 10 free spins, and that’s not all - you’ll also trigger another great feature titled Wild Stickers.

With the exciting Wild Stickers feature, a sticky wild is added for you to take advantage of with your next spin.

This sticky wild will be added on to a selection of free spins and makes up one of the great Free Spins offer here.

The wild is added on one, three, five, seven and nine, giving you the chance to win more than 300 times your stake on each free spin!

Although Emoticoins has been set within the standard Online slots layout of five reels and 30 pay lines, the rest of the theme itself is anything but. Did we mention you can also play up with a stake of up to £300 per spin? And, that’s playable across all devices.

This is one of the most visually pleasing Slots out there, with bright and vibrant visuals adding to the general fun feel that the aesthetic of Emoticoins offers.

There are many Bonus Spins offers to take advantage of here too which also puts this choice of Slots up there with the best.

As well as having a gorgeous visual appeal alongside exciting gameplay jam-packed with Bonus Spins offers, players of Emoticoins also benefit from the upbeat soundtrack.

Playing with the current phenomenon gripping millennials and more across devices everywhere, the Emoticoins Slot has a real tongue-in-cheek feel about it.

This hilarious game features the cheeky symbols themselves with five of these faces among the reels, alongside traditional playing card symbols.

You’ll want to keep an eye out for that all-important Emoticoins logo however, this is the wild symbol and will substitute for all other symbols except the scatter.

With the Wild Blast feature that’s triggered at random, you can get five extra wilds added to the reels for the next spin too. Another symbol of importance is the scatter, in the form of the emoji LOL.

To trigger that incredible Free spins offer feature get three or more of these LOL emoji scatters at the same time among the reels.

It’s certainly one you’ll want to nab as it’s during this time you’ll get your 10 Free spins, the first symbol transforming to a sticky wild.

This is also the case on Free Spins three, five, seven, and nine with an extra symbol also becoming a sticky wild.

Meaning when you spin your last two from the Free Spins offer, you’ll have a total of five sticky wilds firmly in place. Unfortunately, however, you won’t be able to re-trigger this feature.

Before you go to the game with these munchkins, set your bets. To do this, click Bet and set coins sizes from 0.01 to 10. Coins allow players to set the number of coins per line.

Spin sets the reels in motion, and there’s also a fantastic Autoplay function which turns the reels non-stop for a set amount of time. If you want to set the maximum bet that’s allowed, just hit Max Bet. 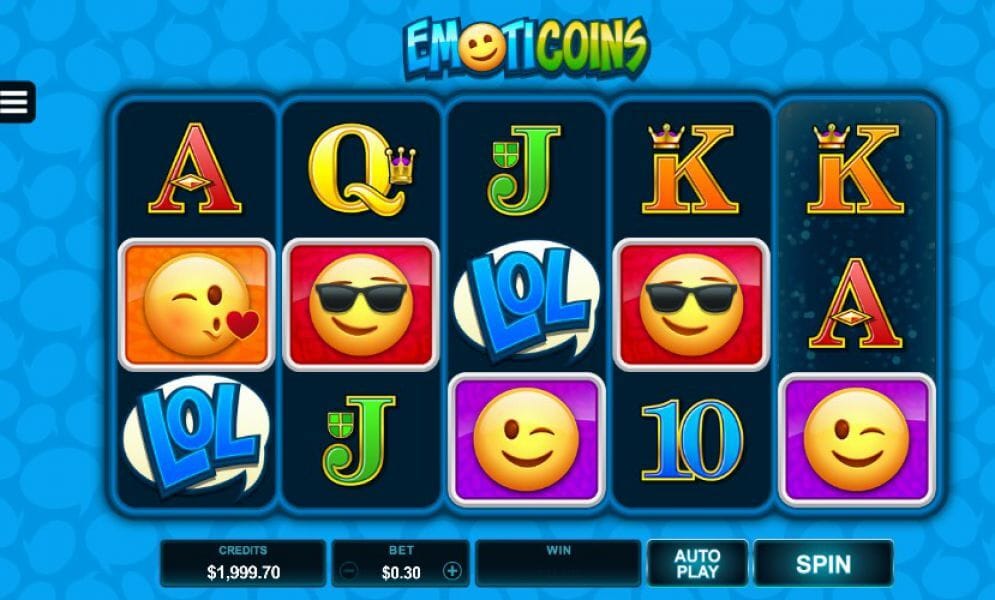 Let’s just say it was about time somebody brought out a game featuring these fun guys and gals! And, the incredible graphics from Microgaming haven’t let them down.

The bright visuals and overall aesthetic appeal make this one of the Best slots online for an exciting experience.

In addition, Emoticoins also hasn’t held back with its soundtrack. It’s all really tongue-in-cheek as a whole but really works to immerse players in a silly world of fun!