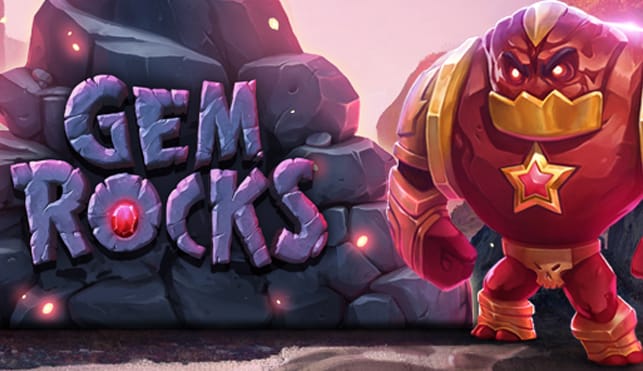 The good brilliant game developers of Yggdrasil are back again to take bettors on a journey back to the almost forgotten Stone Age with their pay by mobile slots game titled Gem Rocks. This is a six-reel, four-row virtual slot game that comes with 4,096 winning ways.

This one is a visually exciting slot, that was released in 2018. Gem Rocks is literarily carved in rock (sorry, stone), and the game's three main features are the profitable Monster Rocks, which show up in different sizes to pack some big wins.

First, punters will have to begin the Drop-down Wins and achieve at least two re-spins consecutively to summon the game's Monster Rocks. This visually impressive slot game is perfect with the gem-hearted stone monsters, as they will help gamers grab wins as massive as 9,000 times their stake in a single spin.

To learn more read the full review below, or just play this game now on deposit by phone bill casino!

After bagging its license in the year 2013, the gaming company called Yggdrasil knows that they are one of the new guys among giants in the casino gaming industry but are have worked really hard to become immensely proud of all that they have achieved in this short period.

To prove their worth, In 2014, Yggdrasil released iSense, which is one of the most hi-tech HTML5 platforms, and is 100% Flash-free, thus allowing the developers to release games on mobile and desktop simultaneously. A year later, Yggdrasil created the popular in-game promo tool Boost that has made waves.

The tool incorporates cash races and missions, as well as tournaments. In 2016, the developer went further to introduce the Brag social media sharing tool, which basically allows people who play their games to brag about their considerable wins to competitors and friends.

Among the many industry acknowledgments they have garnered, the company is the proud owner of the title of 2017 Innovator of the Year during The International Gaming Awards, as well as the Slot Provider of the Year for 2016 during the prestigious EGR Awards.

The game developer, Yggdrasil, has several gaming licenses issued in Malta, the UK, Romania, and Gibraltar. Games that are developed by this passionate, young, and energetic developer can be played on the go from any device. Other free spins slots games from Yggdrasil include:

The symbols Yggdrasil chose to use in this slot title are written on rocks, or better yet, stone plates. The pack of symbols in headed by the star, which comes with the highest payout and is silently followed by the moon, and then the Emerald, and finally the diamond.

There are also low-value symbols represented by the square, triangle, and another diamond. And then, there are three monster rocks that are created out of identical symbols and can be considered as the Wilds in this online slot because they can pick any of the regular logos and convert them into that specific symbol.

The reel grid of Gem Rock's 2018 release is beautifully carved in stone. When you first see the Gem Rocks video slot, you'll notice that it features six reels and four rows, and also offers 4,096 winning ways. All you will be required to do if you want to win a useful payout is to get a minimum of three matching symbols on the slots adjacent reels, beginning from the leftmost reel. Symbols show up in regular size and also in a unique 2×2 formation.

A single spin of the Gem Rocks reels requires a fixed stake amount of 50 coins, but you can alter the coin value as you wish, which means that you can bet as little as £0.10 and as much as £50 for a single spin. The game's Drop-down feature is always active, but more about them will be discussed in the following section. 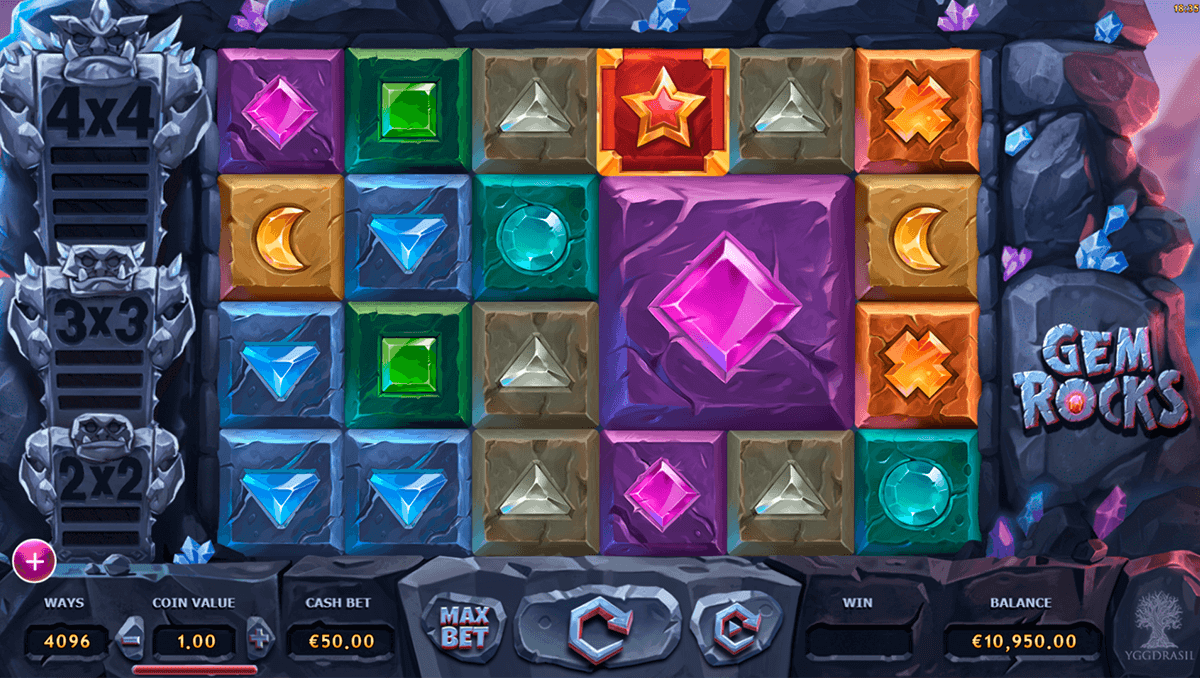 If you are expecting to find standard free spins in the Gem Rocks online slots game, then you just might not get any. However, you can enjoy lots of consecutive winning combination because of the game's drop-down wins. Each time a punter gets a winning combo, the symbol that forms the winning combination will vanish and create room for fresh logos to show up and possibly create another winning combo.

Drop-down Wins are connected closely with the online slots feature. Make two, five, or nine drop-down wins consecutively, and you will get 2×2, 3×3, or 4×4 the Monster Rocks. The best way to keep the progress of your following drop-down wins is by monitoring the gem rock meter located on the left side of your gaming screen. Gem Rocks are made of identical symbols that will help you build bigger wins. The magic here is to get nine or more of the consecutive slots wins, and you will land the largest, 4×4 Monster Rock.

As mentioned earlier, the symbol that pays the highest in this Yggdrasil slot is the star, giving you 200 coins when you get five of a kind. The max possible payout that a punter can get is fixed at 9,000 times the stake for five of a symbol. Try to gather as many Monster Rocks as possible sounds you can secure bigger wins.

The 2018 version of this slot is mobile-friendly, which means that it can be enjoyed on laptops, desktops, and all compatible handheld devices. Yggdrasil is well known for making video slots that come with excellent game quality and stunning visuals, which is why the gaming experience is always the same on all devices. 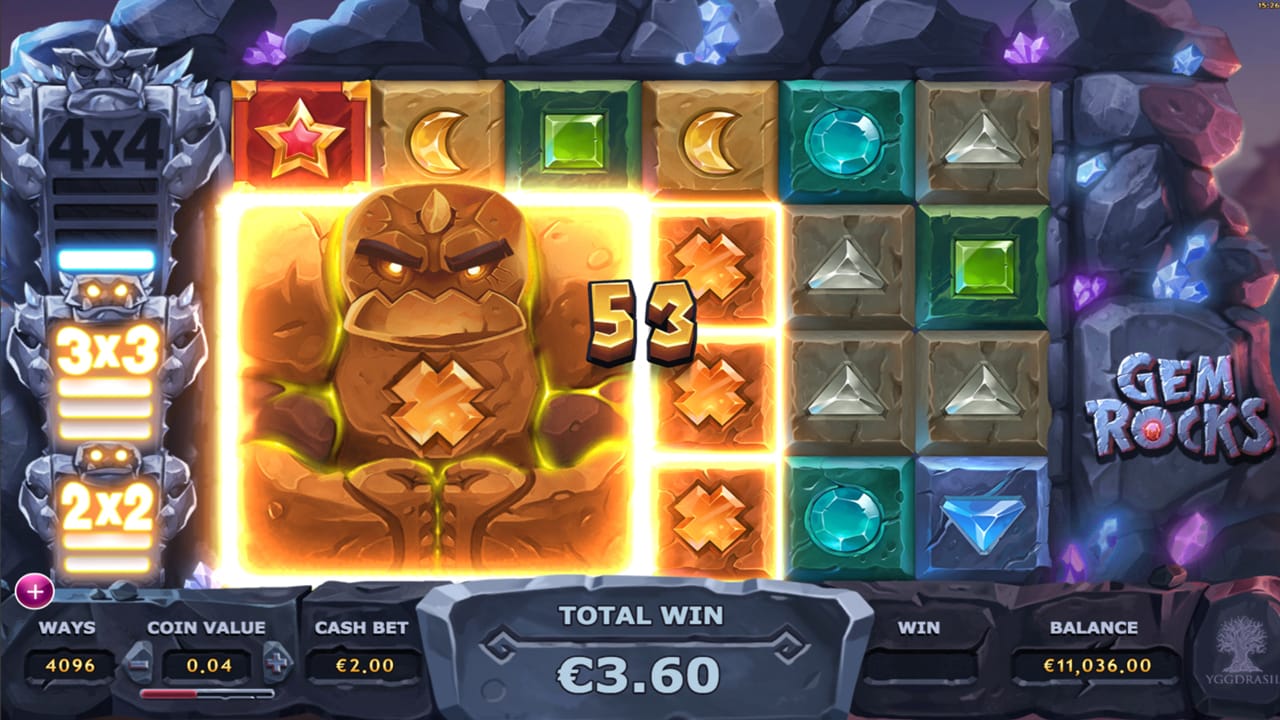 ln terms of visuals, the Gem Rocks online slot game is simply impressive, as it boasts of good graphics and a great soundtrack. If you are considering playing a game that you will enjoy and also win some reasonable money from, then this is the one. The only thing stopping a few people from playing this game is the absence of basic free spins, but the other bonus features are just as good. If you enjoyed this game why not also check out Fluffy Too slot by Eyecon?