About Gold Rush Slots - Read Our Review of This Game

The pay by mobile slots game of Gold Rush has a fun theme based on Gold mining which can be played on the Pay By Mobile Casino site at your convenience.

Pragmatic Play has cleverly engineered it so that you are able to deposit by phone as well so that you have even more options as to how you can play.

There are high-end graphics that you will be sure to enjoy as you play and the main character is friendly and enticing as you tunnel your way deeper into the mines.

Start placing your bets on this popular online casino slot game from as little as 25p where you might be lucky enough to free spins games as you play along.

So play Gold Rush today, deposit by phone, and sift through your finding to see if you have any nuggets of Gold which may be more rewarding than you initially think.

This is a simple casino-style slot that has a significant variance level too, so your rewards can be financially significant if Lady Luck heads down the mine with you, too.

As one of the world’s leading game developers, Pragmatic Play has an impressive portfolio to their name and have many chart-topping games under the belt.

They have created lots of easily accessible, pay by mobile free casino games as well as free spins casino games that anyone can participate in playing.

With such a large range of different themes, backgrounds, and bonus features, there is something for any player on the Pragmatic Play site which is just one of the reasons that they remain so popular.

This is also thanks to the incredibly talented team behind the scenes who create such high-end slots games time after time that players continue to return to.

Due to these main factors, many well-known online casinos are now affiliated with Pragmatic Play, including that of Pay by mobile Casino who share many different Pragmatic Play games by popular demand.

There are slots, live casinos, and Bingo games constantly being added to the Pragmatic Play portfolio and we are always interested to see what comes next from this poplar game developer.

Their games are now available for players to use in 31 different languages and they are licensed in more than 20 jurisdictions, so what is next for the team? 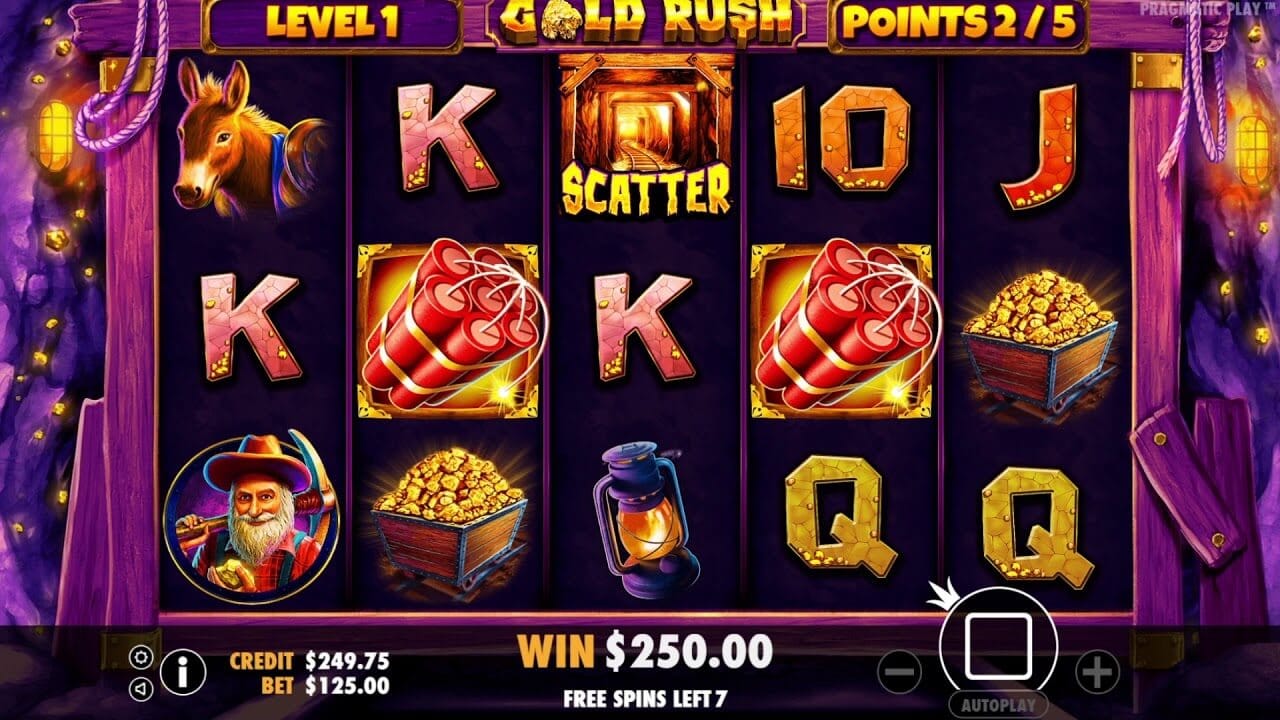 Sitting high in the SlotRank charts in 77th position, Gold Rush has been a big hit from Pragmatic Play with casino gamers around the world, not just in the UK.

Released on Boxing Day of 2017, it has had its latest update in May 2019 where any essential changes were undertaken to increase the playability for all players.

This is a mid to high variance level online slot game with an RTP of 96.5%. Players can start placing their bets from as little as 25p per spin of the reel up to a maximum of £125 so there is a good range here to include players with all sizes of bankrolls.

The casino game of Gold Rush is a five-reel, three-row, 25 pay line slot that can be played on all Smart devices.

This feature has been jumped on by players globally because Gold Rush is one of the best free spins slots games available to play currently and you will quickly see why if you have never played it before. 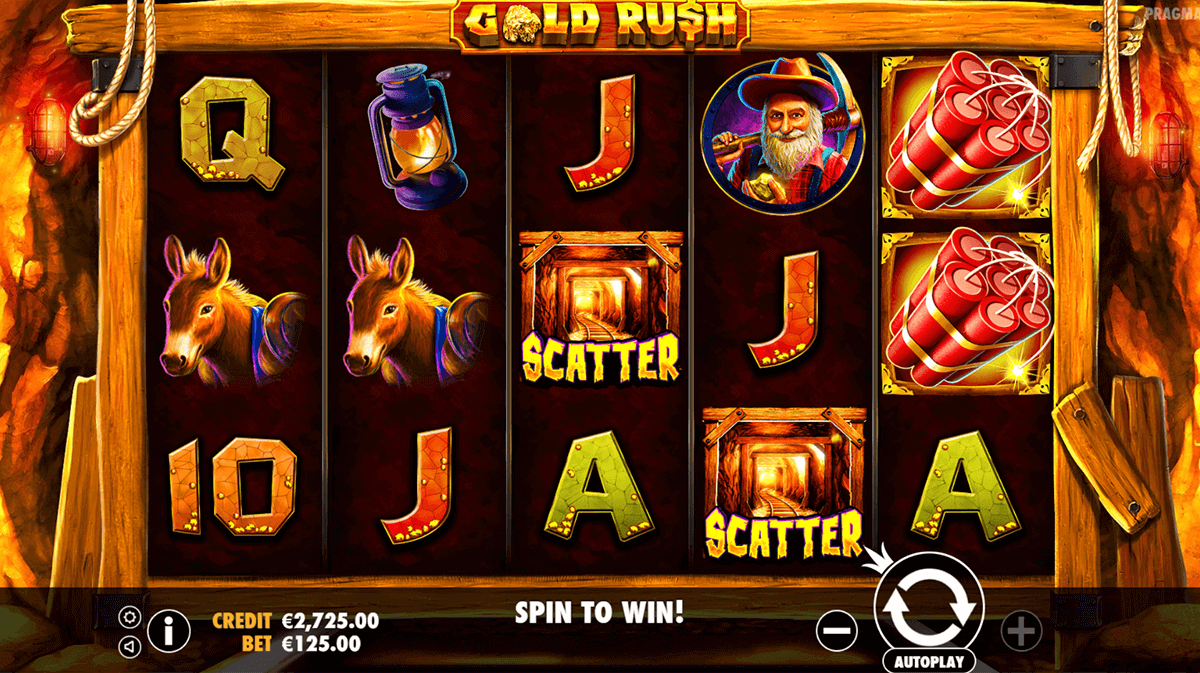 The highest paying symbol in the online casino game of Gold Rush is that of the bearded miner, so if you can land a minimum of three of these symbols at any one time, then you will be able to win yourself a multiplier.

The most significant of which is awarded when you aligned five bearded miner symbols which will see you win 20 times your initial wager.

The wilds in this slot are the dynamite sticks and they can replace all symbols in your game except the scatters. Scatters will only appear on the three central reels, and if you are able to include one in a winning payline then you will trigger your free spins slots game bonus.

You will receive 10 free spins and at this point, you need to try and collect as many golden nuggets during your free spins games. The more golden nuggets you gather, the more bearded miners will be added to your game which will increase your likelihood of winning greater cash prizes.

You can win a maximum of 29 extra bearded miners if you can collect a minimum of 15 golden nuggets during your free spins games, which will lead you to a significant advantage. If you land a scatter during free spins mode, you will be rewarded with an extra two free spins each time.

We love the game of Gold Rush created by Pragmatic Play because of its high-end graphics, its interesting theme, and the number of bonus features. It is here where the larger wins can accrue and it is also here where this pay by mobile casino game gets the most exciting.

The free spins mode not only enables you to spin the reels without spending a penny but also enables you to increase your cash wins as you continue throughout the game, as well as having the opportunity to win more free spins.

This is not a difficult slot to get to grips with but it certainly will continue to entice you back from more time after time as you quickly realize just how much fun it is and how much potential it has.

The theme has not been overdone so it still holds a great deal of interest for players, which, combined with the higher variance level, can see some impressive cash prizes along the way. Keep mining for gold as it could very well land straight in your pocket during this casino game!

You might also want to try Bonanza slot and see if luck's on your side!