Originally released by Barcrest, Reel King Mega slot re-vamps the classic Reel King deposit by mobile slot that became a staple of pubs all over the UK, subsequently digitized by Novomatic. Its digitization in the form of Reel King Mega enables a new generation of players to make their version of the classic.

When choosing a game to play, we believe it's important to give our players information about the game, including RTP, Volatility, Bonus Features, and more. In the table below you will find a summary of the Reel King Mega slot.

In a classical fruit machine style, this pay by mobile casino game has 5 reels and 20 paylines. Reel King Mega’s most valuable symbol is a pot of gold, and the standard card symbols are medium-high value. Matching 3 to 5 symbols on a payline will generate a win, and the pay table is as follows:

This slot has a minimum bet of 20p and a maximum bet of £200. Playable on all platforms such as mobile, tablet, and PC, there is an RTP of 95.12%, and it has been described as a low variance slot.

Although Reel King Mega is low variance slot, a max win of 500x your stake can be quite fruitful. Play with the highest possible stake of £200, and you can pocket up to £100,000 on a single spin here. 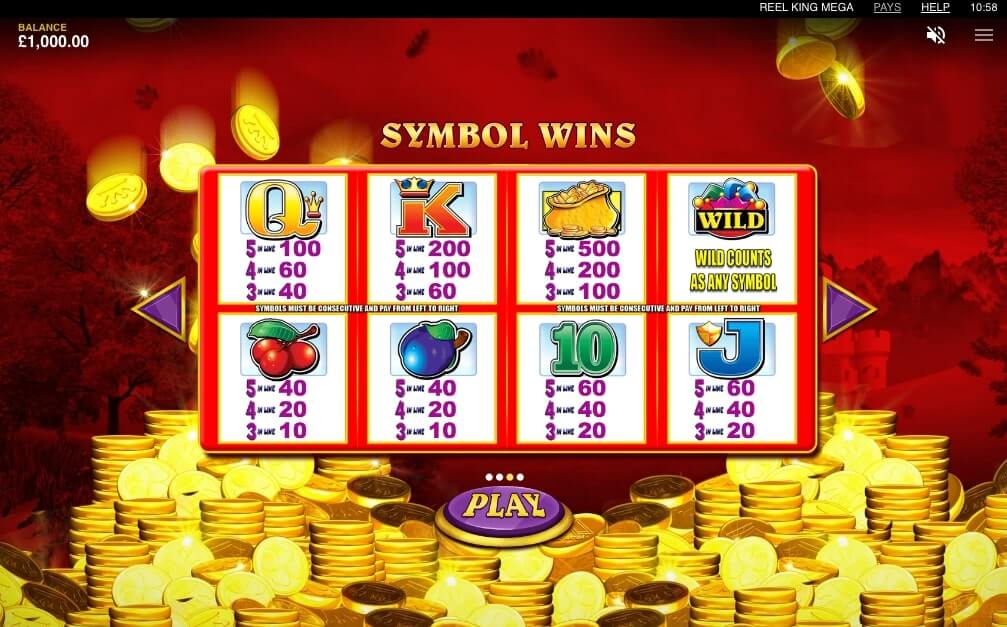 Reel King Mega slot has a randomly triggered feature referred to as the King’s Crown bonus feature. The crown logo will jump frantically around your screen, turning regular symbols into wild symbols. You will often get one or two, but the game does occasionally reward you with even more wilds. 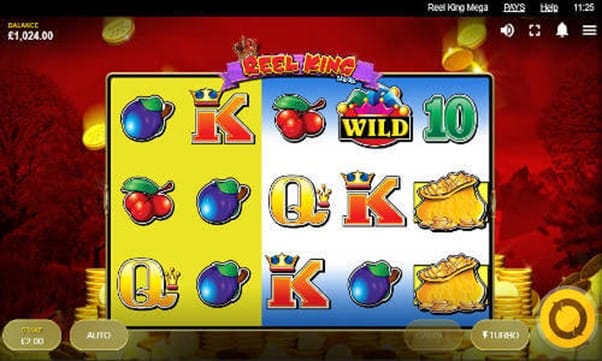 Founded in 2014 by a group of casino veterans, Red Tiger Gaming is dedicated to developing the best casino games possible, including the Reel King Mega slot here at Pay By Mobile Casino. Combining experience and passion, this group can create slots that provide an excellent gaming experience.

The makers of Rocket Men have won an array of awards for their world-class slots. From awards for how innovative their games are to the mobile supplier of the year; the industry recognises the outstanding work Red Tiger Gaming is doing. They are certainly a developer to watch.

Except for Reel King Mega that Red Tiger Gaming offers here at Pay By Mobile Casino, their catalogue also contains slots such as Yucatan’s Mystery and Golden Tsar. We think you’ll enjoy these just as much as Reel King Mega, as these developers just never seem to miss with any shot they take. You can always rely on Red Tiger for their quality.

Take a look at the list below for some other game’s on offer at our online casino.

Verdict on this Slot

Reel King Mega’s appeal is to the sector of the pay by mobile casino game industry that worship the Reel King brand. Red Tiger’s version, with its relatively low max win of 500x, low volatility, and outdated visual style may be dull and unentertaining for most players. It will be appreciated by those that would find excitement in the nostalgia it can provide.

Rolling Stone Age Slot is another popular title that can be accessed when you sign up to Pay by Mobile Casino today, where you can also take part of our amazing offer that gives you the chance of winning 500 Free Spins.