Summary of Temple of Iris 2 Slot

This pay by mobile casino game is loved for its lack of jackpot and its many ways of winning immediate cash prizes where a sizeable 50 times your initial wager can be bagged.

Stop imagining yourself under the starts of Giza night sky and play this game on Pay By Mobile Casino today, where the enticing pyramids and the history surrounding them will lure you into playing time and time again.

This is a fairly volatile slot but the battles of Egypt have been much more volatile throughout its past so we are sure that you will survive.  For an impressive free spins casino games option, look no further and head to the pyramids without actually leaving your living room!

Eyecon - The Developers of Temple of Iris 2 Slots

Leading games developers, Eyecon, are responsible for creating Temple of Iris 2 along with many other free spins slots games. They create their games so that they can be played on any sort of platform you desire so that they are as easily accessible as possible.

They offer a wide range of different bonus features, as well as storylines and backdrops so that there is something to suit every player that heads their way. For free spins casinos games, Eyecon has everything you need, plus so much more on offer.

Going to huge efforts to create clever and gripping casino games, Eyecon takes their time to find the ideal way of being able to bring traditional and modern styles of slots game to you.

There are games with impressive jackpots as well as casino games with large numbers of available free spins for you to pay by mobile.

Available for players in 24 different languages, Eyecon is now affiliated with many different online casinos, including those of Pay By Mobile Casino who offer an impressive range of pay by mobile slots for their players through their deposit by phone casino payment option. 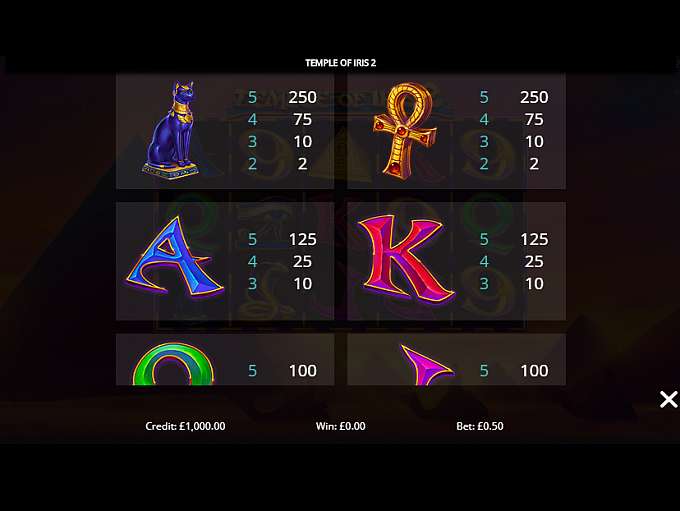 The pay by mobile slots game of Temple of Iris 2 was released in March 2020 and has been an instant success with players around the world. In just a few short weeks, Temple of Iris 2 has already made it into position 139 of the SlotRank charts and is a great addition to the Eyecon portfolio of casino slot games.

This is a five reel, three row slot with 25 paylines which can be accessed at the Pay By Mobile Slots Casino site on any Smart device, including those of desktops, tablets, and mobiles. Temple of Iris 2 is a great casino game that has had significant improvements made to it since the original game of Temple of Iris was released just two years ago.

Players seem happy to have had the jackpots removed and to have had the cash prizes added instead. But will the pyramids of Giza be a lucky place for you to travel to or not as you play this deposit by phone bill casino slots game today? 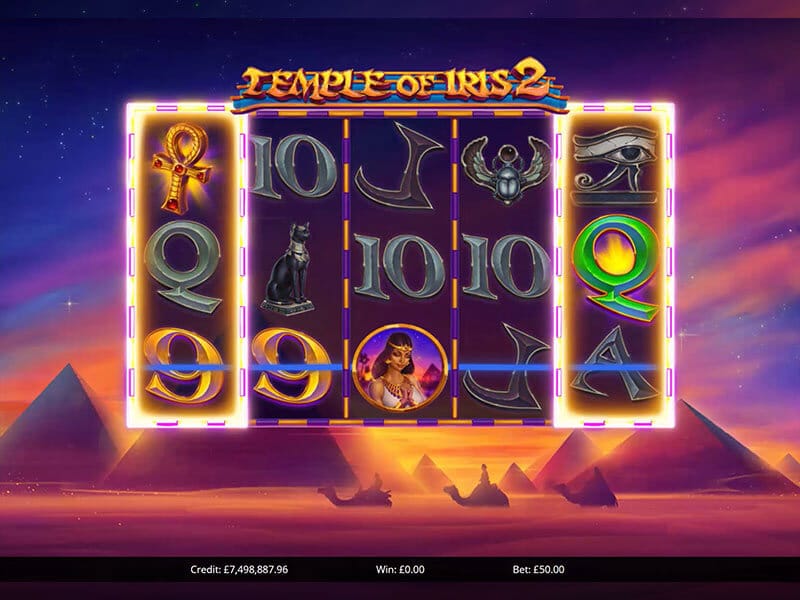 Bonus Features and Free Spins in Temple of Iris 2

The highest paying symbol in this slot is that of the Priestess Wild which pays a staggering 380 times your initial wager if you are able to align five of this symbol on your reels at the same time - discover more.

The Priestess is also the Wild of the game and will reward you with a double multiplier which can also be activated if you are able to land at least two golden pyramids Scatter symbols on your reels, too. The Scarab Beetle and the Eye of Horus are the next highest paying symbols with 38 times payout on your initial wager.

This free spins slot games best feature is that of the amount of Free Spins on offer and this is by far the biggest attraction of the casino game where you can deposit by mobile phone bill.  Align a minimum of three pyramid symbols and you will activate Free Spins games mode.

Here, between three and five scatters will also be rewarded, along with a multiplier correlating directly to the number of pyramid symbols you aligned. The maximum number of Free Spins available for you to win in the casino slot of Temple of Iris 2 is 15, so make the most of them, but you can win yourself a maximum of 225 Free Spins if you are able to re-trigger!

Last Thoughts on Temple of Iris 2 - Hit or Miss?

We are actually pleased that the jackpots have been removed for the original version of the casino slot, as we love the cash prizes more. They are far more frequent and are much bigger when they land on your reels.

With 50 times your initial wager up for grabs, these wins can be sizeable, and though they may not be life-changing, they are definitely worth playing for. There may not be a particularly high RTP here, but as the game is so much fun, we are happy to continue playing this exciting and well-constructed slots game set in the heart of the Egyptian pyramids.

The Free Spins are by far the best additional bonus feature in this free spins slots games advantageous, and though they aren’t the only ones, they are the ones that you will benefit from the most.

So, aim to land as many of those pyramid Scatter symbols as you can whilst you are playing so that you can land yourself Free Spins, Multipliers and Scatters all at the same time.

Here's another game you might also want to try at Pay by Mobile Casino, check out Sugar Train Slot.